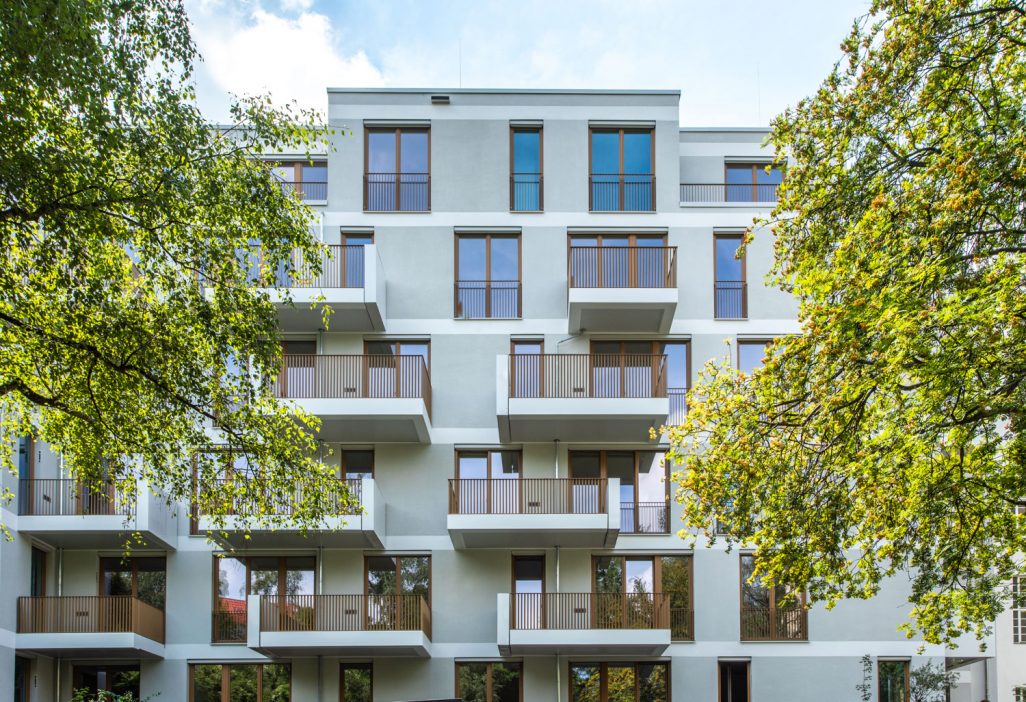 The Graefekiez neighbourhood is the heart of Berlin’s popular Kreuzberg district. Here, between Hasenheide, Hermannplatz and Paul-Lincke-Ufer, a new residential project developed by BUWOG is a prime example of how you can create living space while making efficient and sustainable use of the available land – a precious resource in the densely built-up urban environment.

Berlin is growing – and with an increasing population, the need for living space, already in short supply, is also on the rise. However, free land for ambitious new construction projects in the centre of large cities like Berlin are few and far between. So how do you build urgently needed housing while still maintaining a high quality of life and a sustainable approach to the challenge of land as a limited resource? A recently completed building project developed by BUWOG provides a case in point for the smart and efficient use of urban space.

Jahnstraße in Kreuzberg: sustainable use of open space

But how do you build new housing in Berlin’s densely populated centre? Several solutions are possible. The key word here is urban density, which needs to be seen as an opportunity for urgently needed living space. One possibility is to add more floors to existing buildings. Another is re-densification, where small open spaces or the inner courtyards of city blocks are used for development. “This makes sense both from an economic and environmental point of view, especially when you consider the idea of people living and working in close proximity to each other. Among other things, the shorter distances reduce unnecessary traffic and improve the city’s carbon footprint,” explains BUWOG project manager Juliane Holtmeyer.

From an environmental sustainability perspective, however, re-densification is not always 100% advantageous – especially if the development consumes existing green spaces and results in an increase of impervious surface areas. The new BUWOG XBERG LIVING building, situated in a rear courtyard in Graefekiez, managed to solve two problems at once: developing new urban living space while also turning impervious surfaces into greenscaped land. To achieve these goals, BUWOG repaired and revitalised previously existing structures. 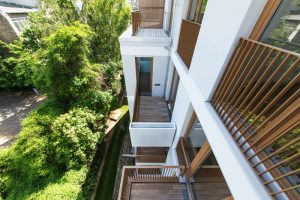 The starting situation: an originally five-storey building in a typical Berlin courtyard that had been rebuilt to two storeys after being damaged in the Second World War. The basement tenements had been filled in with rubble from the war. Moreover, the entire courtyard had been imperviously sealed with asphalt. Development Manager Juliane Holtmeyer: “As part of the project development for the new residential building, we removed the asphalt, decontaminated the soil and reinterpreted the original courtyard layout of Berlin’s classic perimeter block development.”

The result: 41 new condominiums distributed over six floors, plus a staggered top floor in the middle of the vibrant Graefekiez neighbourhood between Urbanstraße and Volkspark Hasenheide, not far from the Hermannplatz metro station. The quiet and sheltered courtyard setting is strictly car-free. Instead, there are small green spaces, a playground and bicycle parking. Good for the climate: the building is topped by a greenscaped roof. Green roofs not only provide an additional habitat for insects and birds, but also store rainwater, which is released back into the natural water cycle through evaporation. This improves the microclimate and provides cooling relief from the summer heat. 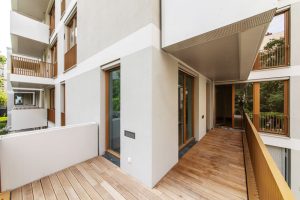 “The site logistics were quite challenging, even for the residential construction specialists at BUWOG,” Juliane Holtmeyer reveals. “As the new building was developed in a typical Berlin courtyard, the construction work had to be executed in extremely cramped conditions.” A construction crane was installed in the courtyard to lift material that would not fit through the narrow entranceway over the front building facing the street.

The flats have all been handed over to their new owners and the first residents have already moved in. All units come with their own garden, large balcony or on-top terrace with breathtaking views far over the city – an exciting yet peaceful hideaway in the heart of Kreuzberg.

“Urban density makes sense both from an economic and environmental point of view, especially when you consider the idea of people living and working in close proximity to each other. Among other things, the shorter distances reduce unnecessary traffic and improve the city’s carbon footprint.” 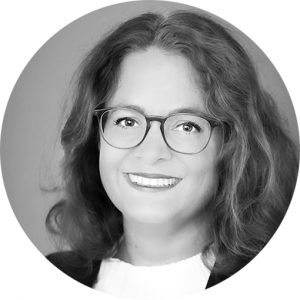 This could be interesting too:

The 52° Nord development is growing: construction of BUWOG HELLING HOF begins in Berlin-Grünau