As mentioned in my blog about the “First Vienna Residential Market Report – Edition 2014”, as part of a series I would like to present various districts of Vienna and a new building project in each. In this series I’m particularly interested in Döbling, the 19th district of Vienna, and BUWOG Group’s new building project “Pfarrwiesengasse 23”. The latest facts and figures we’ve researched for our new edition of the “First Vienna Residential Market Report” are already included in my blog series. Look forward to the 2015 edition, which we’re presenting together with EHL at the end of February 2015.

Döbling is located in the northwest section of Vienna at the edge of the Wienerwald (Vienna Woods). The district was formed in 1892 from the former Vienna suburbs of Unterdöbling, Oberdöbling, Grinzing, Heiligenstadt, Nussdorf, Josefsdorf, Sievering and Kahlenbergerdorf. In 1938 the district was expanded to include Neustift am Walde and Salmannsdorf, which had previously belonged to the district Währing. Today Döbling with its Wienerwald villas is considered an upscale district like Währing and Hietzing and features an important wine-growing industry. 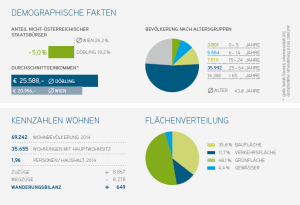 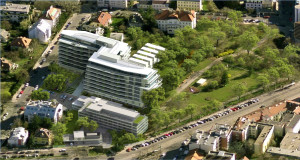 After the hard facts and figures on the 19th district, I’m pleased to be able to present you our elegant project on Pfarrwiesengasse 23.

Likely beginning in summer 2015, BUWOG Group will be building what for me is a highly extraordinary residential project. Around 80 residential freehold units will be constructed. The customer can choose between a single-floor flat, maisonette or also terraced houses – all units will have either a terrace, balcony or their own garden.

In addition to the exclusive location, I would like to call attention to the facilities entailed by this project. Among other things, there will be a spa area, outdoor swimming pool and the building’s own wine cellar. Additional assets for the highest quality of life are the sound infrastructure and transport connections. In no time you can also be in Döblinger Hauptstraße or Heiligenstädter Straße to shop in the Q19 shopping centre.

Other shopping opportunities such as grocery stores and pharmacies or restaurants can be easily reached on foot. With the variety of nature areas, the marvellous location at Strauß-Lanner Park and luxury of the green environment in the 19th district the residents on “Pfarrwiesengasse” are not disadvantaged with complicated transportation routes. One is quickly underway due to the proximity to the S45 and the U4 metro/railway station Heiligenstadt. Numerous buses and ÖBB connections stop in the same railway station. 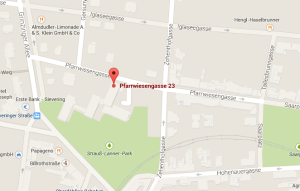 If I’ve piqued your interest, on our homepage at  www.buwog.at  there is an option to register and obtain information online.