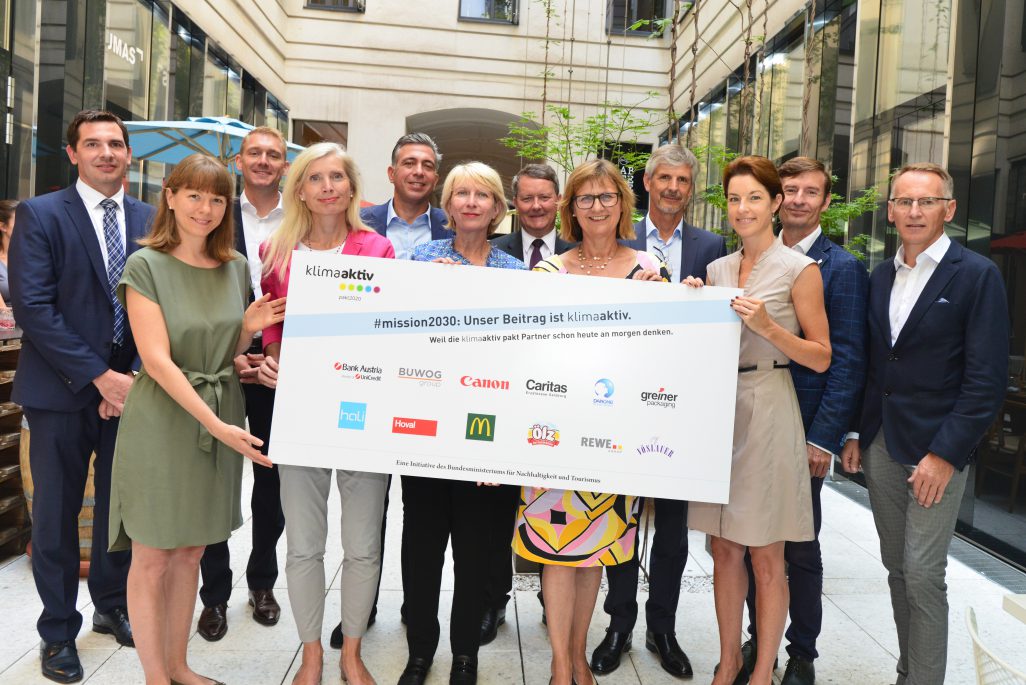 With enormous commitment, goal reached: the partners of the klimaaktiv pakt2020 have already achieved their jointly set targets a year ahead of schedule. This is encouraging because the extension of the pact to 2030 is already in planning.

As part of the Federal Ministry for Sustainability and Tourism’s klimaaktiv pakt2020, 12 twelve major Austrian companies, including BUWOG Group GmbH as the only company from the real estate sector, have set ambitious goals to help reach the national climate targets.

Through 2020 the specific targets include a reduction of greenhouse gases by more than 16 percent, an increase in energy efficiency of at least 20 percent and the use of at least 34 percent renewable energy sources (10 percent in the transport and mobility sector).

The enormous commitment of the partners to the pact is reflected in the results: the jointly defined targets for 2020 have already been reached in 2019. Sustainability Minister Maria Patek congratulates the companies on this marvellous achievement for climate protection: “As pioneering companies, our klimaaktiv pakt partners show that energy efficiency, business success and climate protection can be easily combined. With consistency and plenty of dedication, they have already ensured a reduction of more than 1.39 million tonnes of CO2 since 2005 – which is equal to the emissions of approximately 200,000 flights around the world”.

Continuation and expansion of the klimaaktiv pakt through 2030

The continuation of the klimaaktiv pakt through 2030 is already being planned, and the partners involved at this point are also interested in continuing their efforts to implement the national climate targets of the Austrian Climate and Energy Strategy #mission2030.

The targets for the “new” pact have not been determined yet, but by joining the pact companies commit themselves to reducing greenhouse gases by at least 50 percent compared to 2005. Thus the target extends far beyond the national climate protection target of 36 percent.

During my school years, I completed three internships at the BUWOG Group. Even then, I was enthusiastic about the variety of responsibilities and deep insight into the areas of communication and marketing. Since the fall of 2018, I have been studying at the University of Vienna for a bachelor's degree in political science with a focus on communication and since then I have also been working part-time at BUWOG as a trainee in the department of Marketing & Communication. I find the broad range of tasks and topics, the cooperation with my colleagues and the good working atmosphere within the team especially positive.
To the profile ofKonstantin Gary Show all posts byKonstantin Gary