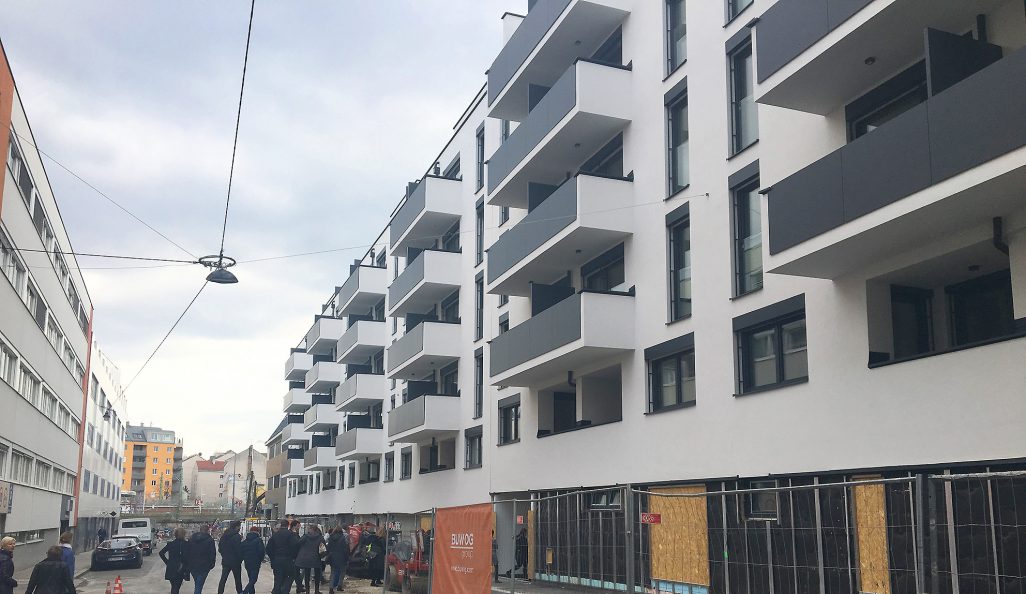 This year, too, BUWOG employees in Vienna were invited to take part in an exclusive property tour.

Around 40 colleagues took up the offer and travelled by coach to a selection of projects. Despite the gloomy prophecies, the weather god was gracious and at least spared us from rain, even if there wasn’t any sunshine.

The mood among the colleagues was positive, the interest enormous. Some of them had already been on a property tour, while others came along for the first time. Everyone was able to get an overview of our properties, and a couple of astonished and/or impressed “oohs” and “aahs” could be heard.

Our sales manager Peter F. Berchtold guided us through the construction sites in trusted fashion, telling us about the details of the projects as well as the special features of the respective districts where we were.

We would also like to extend a very special thank you to our project managers from construction management, Roman Grandits, Roman Grünwald and Gerhard Holzer, who welcomed us on the construction sites and also told us about their special features and particularities.

Pfeiffergasse 5 is a privately financed condominium project, which is still under construction but has already been fully utilised. There were 81 condominiums ranging in size from 43 sqm to 100 sqm available. The apartments will be handed over already as of 1 May 2019, which was also the reason that we could no longer enter them to avoid possible damage such as scratches on the newly installed parquet floors.

128 privately financed rental apartments are being built at Pfeiffergasse 3. This construction site is also about to be completed and the apartments handed over as of 27 May 2019.

Grinzinger Allee is a project where a pure quality of life can be found. The exclusivity of the location not only offers infrastructure, but also plenty of greenery. Directly on its doorstep is Strauß-Lanner Park, and recreational areas such as Cobenzl or Kahlenberg are also just a stone’s throw away. In this project 43 privately financed condominiums are being built, distributed across six floors. The highly appealing stairwell in this complex is particularly noteworthy. Fitting for the 19th district, which is known not least for its wine taverns and vineyards, a mosaic grape is being made of colourful tiles. Here we also got the chance to view apartments and enjoy refreshing beverages.

The project on Vorgartenstraße at Nordbahnhof is being carried out as part of the Vienna Housing Initiative. The 168 rental apartments, some of which are connected, are located in one of the largest city-centre development areas in Vienna. The city of Vienna’s story-map “From the train station to the open centre”  provides a vivid illustration of what the residents think about the neighbourhood and shows pictures of how beautiful “Vienna’s biggest reclaimed green” is.

On we continue to Seestadt Aspern – 1220 Wien, Janis-Joplin-Promenade: “SeeSee”

There’s an end to even the loveliest day

After these impressions, we still wanted to view our project “Amelie” on the former grounds of Coca-Cola, but were unfortunately hindered due to a massive traffic jam on the A23. Nevertheless, we happily capped off the evening over dinner at Biergasthof Otto – thank you to BUWOG management, who invited us!