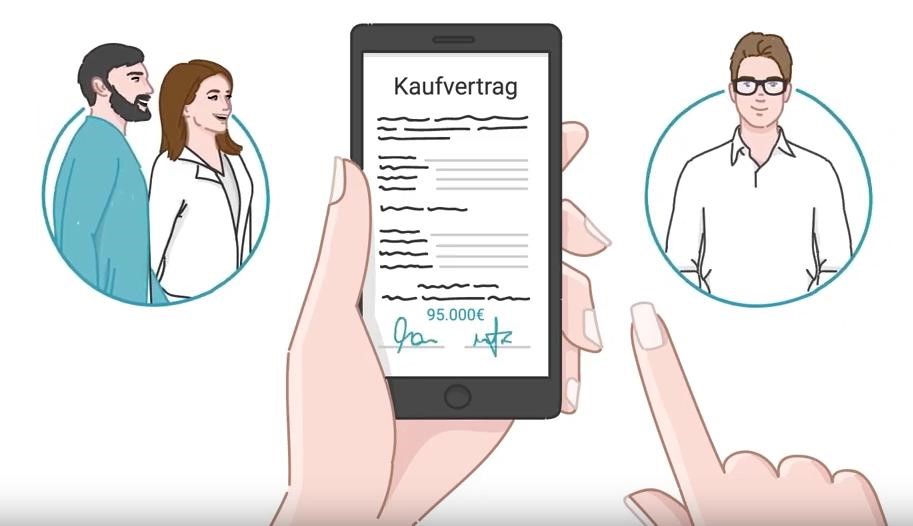 Since the start of the crisis, legislators have been attempting to counteract the spread of COVID-19 with a wide array of measures. One of these measures is the amendment of the Notarial Code (Notariatsordnung), with which a new paragraph also became effective on 5 April 2020 (§ 90a of the Notarial Code). This has made it possible to conclude notarised contracts or notarial acts without a personal appointment with the notary and to carry out certain official notarial acts and signatures electronically.

And what does this have to do with real estate? For processing real estate transactions, such as the purchase of land or apartments, this represents a genuine alternative to physical signatures and an enormous advance in digitisation.

As a modern real estate company which is aware of the importance and the various potentials of digitisation in the industry, BUWOG immediately took advantage of this option for digital processing: thus, the first entirely digital real estate transaction in Austria was carried out under the new paragraph when selling a parking space – a highly promising achievement. Both the purchase contract and the deed of pledge were signed in electronic form and certified by a notary public.

It was technically implemented via the platform of the start-up “Realest8 Technologies” and an “A-Trust” data room. A data room is a protected virtual room in which documents can be uploaded and made available to other persons. Once the contracting parties were identified via Web-ID, all documents between the parties were negotiated directly via the platform’s negotiation tool using a video call tool. After the contracts were coordinated and finalised, the authenticated documents were uploaded into the data room, the identities of the parties were proven to the notary and the digital signatures were certified by the notary during the video call by way of split screen. Afterward, the registration of the right of ownership and deed of pledge were applied for at the authorised land register court and subsequently approved.

As with numerous other laws and regulations since the beginning of the COVID crisis, however, the newly created § 90a of the Notarial Code has not been clarified to the greatest extent possible. For example, the potential applicability of § 90a of the Notarial Code in real estate purchase contracts has been viewed critically by several representatives of the real estate industry as a result of its wording. For example, the paragraph provides for the requirement of an official notarial act for the “effectiveness” of legal transactions. However, purchase contracts for real estate are also effective without notarisation. On the other hand, the notarisation of the signatures on the purchase contract is required for subsequent entry in the land register and consequently for the transfer of ownership (in accordance with property law).

Since a clear and unambiguous legal situation is indispensable, particularly in the area of digitising legal processes, the legal department, together with Dr. Thomas Seeber of the law firm Kunz Wallentin, wrote an article, which was published in the September issue of the real estate trade journal immolex.

In this article, the applicability of § 90a of the Notarial Code to real estate transactions was clearly affirmed, as no legal transaction becomes effective upon mere notarisation, and the intention of the legislator, namely the reduction of personal contacts, was clearly evident based on the legal documentation. The increasing number of digital transactions carried out since the paragraph came into force and the resulting acceptance by the land registry courts also militate clearly in favour of this interpretation.

The future is digital

At present, § 90a of the Notarial Code is still limited until the end of this year – despite the fact that the regulations are now tightening again due to the tense situation. A probable extension in view of current developments is under discussion at present and would be highly desirable, not only with regard to COVID safety measures but also for the further digitisation of the real estate sector. With the first digital real estate transaction, BUWOG has adopted a pioneering role, taken far-reaching measures for the future and taken the necessary digitisation of the real estate sector a step further.

To the profile ofAnna Kogler Show all posts byAnna Kogler