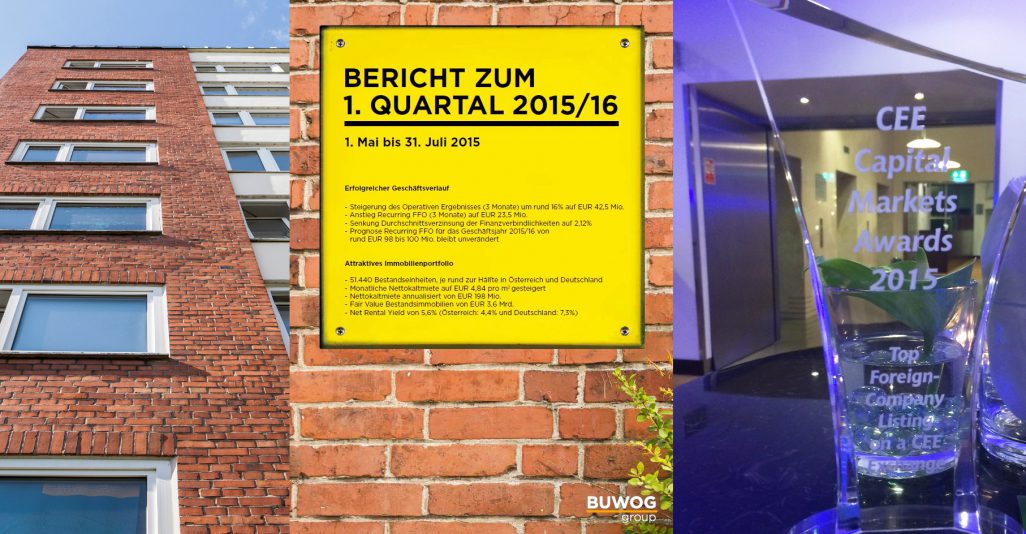 As in my previous posts as well, here is a short update on the latest developments in the company from the perspective of the Investor Relations & Corporate Finance division:

Yesterday, 29 September 2015, BUWOG AG published its results for the first three months of the 2015/16 financial year. We had a very successful start into the financial year, significantly increasing our operating result in the first quarter by around 16 percent to EUR 42.5 million compared to the first three months the year before. Recurring FFO likewise improved to EUR 23.5 million (Q1 2014/15: EUR 21.9 million). In view of the very positive operational business development, the executive board confirmed its forecast for Recurring FFO of between EUR 98 million and EUR 100 million for the entire 2015/16 financial year.

Read all the details on this in the report on the 1st quarter of 2015/16, which you can find to download here.

BUWOG has now been listed for nearly 1.5 years on the stock exchanges of Vienna, Frankfurt and Warsaw – and its share performance continues to be extremely positive.

Launched at a share price of EUR 13.00 on 28 April 2014 last Friday, 25 September 2014, the BUWOG share closed at a price of EUR 18.45. This means an increase of around 42% since BUWOG AG’s listing on the stock exchange. Including the EUR 0.69 dividend paid last October, this increase even climbs to approximately 47%.

The foundation of our positive share price performance is the successful work of all BUWOG employees. Last year all of the operational targets set were reached or surpassed. This is also acknowledged by our investors.

We hope and expect that our future results will continue to convince the market of the intrinsic value of the BUWOG share. That the market’s perception of us is now very positive was confirmed to us on 17 September 2015 in Warsaw: we were awarded the prize for the best foreign listing on a Central and Eastern European stock exchange by an international jury. I accepted the award in question at an evening gala for BUWOG in Warsaw, where I found our business model as well as our efforts at transparency very well-received.

Likewise in mid-September, executive board members Daniel Riedl and Dr. Ronald Roos as well as the Investor Relations & Corporate Finance team explained the positive results of the last financial year and our strategic direction and objectives to more than 100 investors in group meetings and presentations at two international investor conferences and in the context of roadshow meetings in Amsterdam, Den Haag, London, Paris and Brussels. Here, as well, most of the feedback was very positive. There is also growing interest of participants in the capital market, particularly for our property development activities.

Following yesterday’s publication of the first-quarter results of the 2015/16 financial year and the related talks with analysts, we are also currently preparing for the annual general meeting on 13 October 2015 at the Vienna Stadthalle. We hope to be able to succeed here as well.