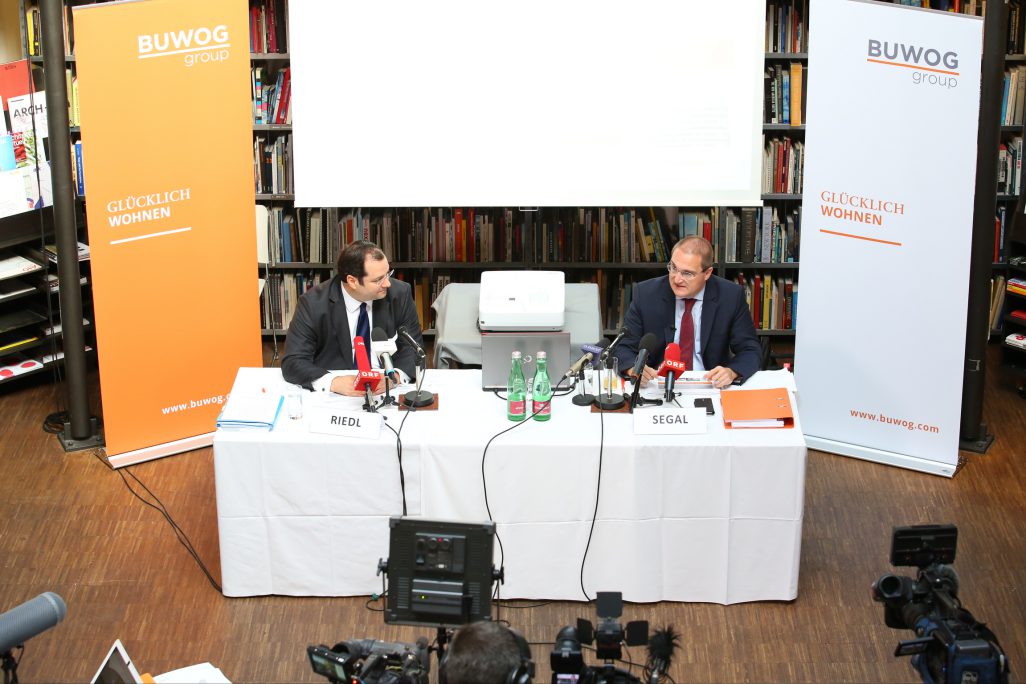 September was characterised by successful results for the BUWOG Group. Join the department of Corporate Finance & Investor Relations to take a look back at the latest developments in the company and read what investors can soon expect:

The figures for the first quarter of the 2016/17 financial year were published just the week before last, on 28 September. The record result for 2015/16 announced in a press conference at the end of August already suggested a continuing upward trend for the BUWOG Group; nevertheless, we are filled with great pride to be so successful together for you in our activity.

Looking back, September began with an exciting trip for our Executive Board members Daniel Riedl, Andreas Segal and Herwig Teufelsdorfer as well as the team from the Investor Relations department: as part of a two-day programme, on Capital Market Day in Berlin institutional investors as well analysts from the sell side had the chance on location to gain insight into our company and our business model, particularly our development pipeline in Berlin – this included a property tour along BUWOG’s numerous waterfront property developments in the German capital. We are very delighted with the enormous interest and large number of participants and are extremely optimistic about the evolution of our development business as the significant driver of future results.

Just a few days later, on 6 September 2016, we announced the successful placement of convertible bonds in an aggregate nominal amount of EUR 300 million and denomination of EUR 100,000 each, due in 2021. The convertible bond has a zero coupon. The initial conversion price was stipulated at EUR 31.40 as part of the bookbuilding process and therefore has a premium of around 35% above the reference share price or 56% to EPRA NAV at the time of the placement. The convertible bond has a maturity of five years and is an extremely advantageous source of financing for BUWOG as a result of the conditions realised on the market.

BUWOG has successfully diversified its sources of financing with this transaction. The net proceeds from the issuance will be used primarily to finance growth while focusing on expansion in the business areas of Asset Management and Property Development in Germany. BUWOG plans, in particular, to strengthen its develop-to-hold strategy. The transaction’s proceeds will also be used for refinancing and capex measures. Deutsche Bank, Goldman Sachs International and Société Générale Corporate & Investment Banking acted as joint bookrunners in the placement of the bonds. Berenberg and Kempen & Co N.V. acted as co-managers.

BUWOG has already been listed on the ATX since September 2014. We are now especially proud to have also advanced to the ATX five since 6 September 2016. Thus in addition to the companies Andritz AG, Erste Group AG, OMV AG and voestalpine AG, BUWOG is one of Austria’s five biggest listed companies, and CEO Daniel Riedl as well as the entire BUWOG team are very pleased about progressing to the “premium class”. With a free float factor that rose from 0.8 to an even 1.00, BUWOG is a purely publicly owned company; just 10% of the free float remains with IMMOFINANZ AG and will be held for the purpose of servicing convertible bonds Immofinanz issued prior to BUWOG’s spin-off. The advancement to the ATX five is another sign that we have been pursuing the right strategy for the company and that our path to the future remains promising.

You see, September was especially eventful for BUWOG AG, and it will also continue in the same manner: one of the highlights in the coming months will be the third ordinary annual general meeting at the Vienna Stadthalle scheduled for 14 October. There shareholders will have the opportunity to vote, among other things, on the amount of the dividend that will be announced at the end of the meeting (the dividend payment date is 19.10.2016). Further information on the annual general meeting can be found here. In addition, in 2017 private investors can also look forward to a programme tailor-made for them when our investor relations team is out on the road for you.