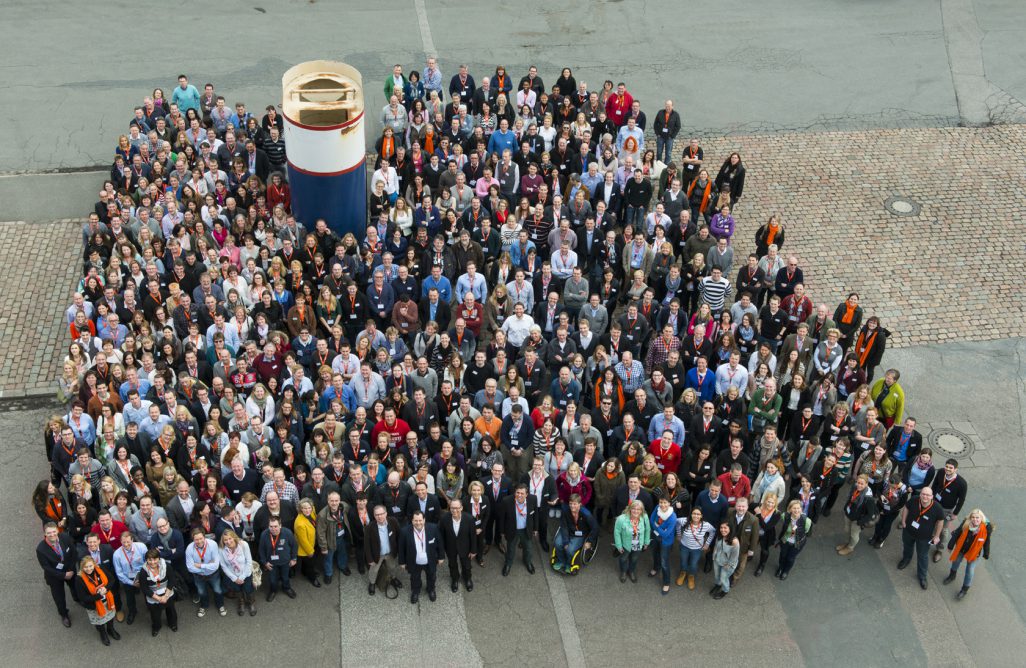 For the second time under the theme of “Navigating the Future” a major BUWOG employee event took place in which the colleagues of all BUWOG locations in Austria and Germany gathered in one location to communicate, learn from one another (“Best Practice”), to discuss, and to celebrate joint successes. The location of this year’s big event: Hamburg, to be more precise “Schuppen 52”, directly on the port. 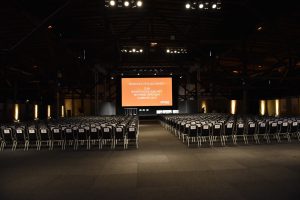 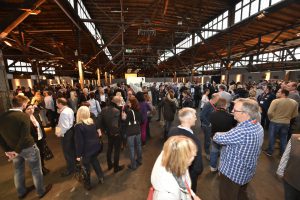 This blog entry is meant to provide a look behind the scenes and provide an impression of the organisational processes of the three-day event.

The first “Navigating the Future” event took place in Loipersdorf in April 2014 shortly before the BUWOG listing, and for many of the new colleagues from Germany was the first chance to get to know BUWOG and its strategy and mission. Barely a year on the entire BUWOG family met up again in Hamburg, where as BUWOG Group we could already look back at a common wealth of experience with the employees of all the “old” (Vienna, Berlin, Villach, Graz, Salzburg, Innsbruck) and “new” locations (Kiel, Hamburg, Hannover, Lübeck, Braunschweig…).

For the “Navigating the Future” organisational team the post-event theme in Loipersdorf was: “One event leads to the next”, for shortly after “Navigating the Future Part I” it was already necessary to begin the planning for this year’s big event.
At BUWOG the marketing and human resources/organisation divisions are primarily responsible for employee events and began working on the Hamburg event directly after Loipersdorf. At an event on this scale reliable partners are indispensable, and in May 2014 a local event partner was sought and the experienced event agency Vok Dams emerged as the winner. As in Loipersdorf, BUWOG was received support for the direction of content at the event from content agency Heitger Consulting.

When scheduling the event it was not only essential to bear in mind the large number of inevitable appointments for board members and management at BUWOG Group, but of course it was also of major importance for us to facilitate the trip to Hamburg for as many employees as possible, which is why the various holiday times in Austria and Germany had to be taken into consideration.
Furthermore, it was decided to schedule arrival this year one day earlier so that those who had to travel from further afield didn’t have to get up in the middle of the night. This gave us the chance for an orderly arrival at feasible times of the day and even a get-together with a drink and snacks in the hotels on the evening of the day of arrival.

When the dates were finally fixed from 5 to 7 March, the logistical planning of the event began.

Preparations are generally begun in varying intensities a year in advance. A rough overview of the scheduling up until “D-Day” is worked out down to the minutest of details that are relevant at the location (for ex.: hotel cancelation deadlines, possible de-icing of the charter planes, parking options at the event location, food intolerances that have to be considered, special needs, any employees having a birthday on the days of the event, etc…) 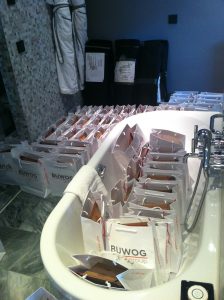 First the locations and hotels had to be found. An early decision was necessary, particularly for the hotels, as such a large contingent of hotel rooms is not that easy to book, of course. At the end of September/beginning of October (so approx. a year before) the more intensive communication began for preparation, for instance the set-up and coordination of registration tools for all BUWOG employees in order to inquire about as many of the participants requests as possible in this first step.
The initial arrival, departure and logistics planning as well as the creation of the first transport matrix, info-mail and programme occurred at the beginning of December. The timely ordering of all the materials used at the event must also be kept in mind, in our case: 550 bags, welcome gifts, nametags, lanyards, badges, rain ponchos + umbrellas just in case, pads of paper, pens as well as scarves and hats for the service and guides.

BUWOG bags for approx. 550 people were stored in a room in the hotel

The most important thing for the success of such a major event is the interplay of the various people involved. Whether BUWOG internally, the agency, consulting team, technology, catering, or bus chauffeur – everyone forms a big team. As with a giant puzzle, all of those involved contribute their pieces to the puzzle and connect them so that in the end there is a big picture, in our case the successful event. 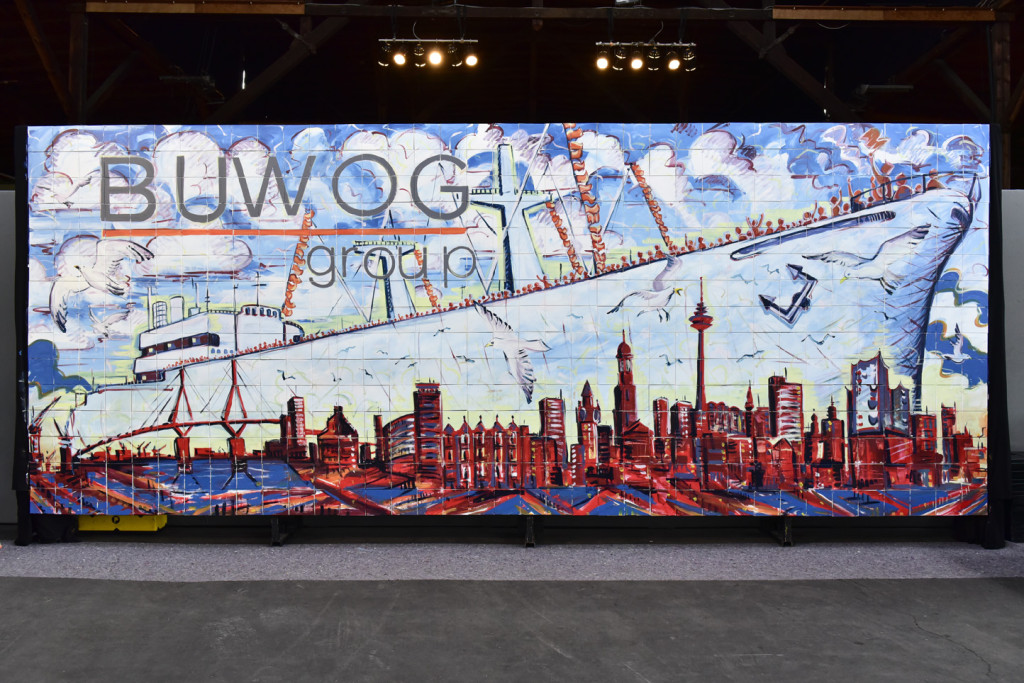 A proper work of art composed of numerous individual pieces was also created at the event in Hamburg.

In addition to our event agency Vok Dams, the content agency Heitger Consulting in cooperation with Ms Kränkl developed the strategic direction with the management board and handled the integration of management. Our two assistants to the management board, Ms Klein and Ms Simetsberger, handled the bookings for the flights for management, who of course had to arrive for a preparatory workshop beforehand, as well as the service on the charter flight. And colleagues from every location handled the bus service and excursion support. The entire marketing and human resources team were energetic in assisting with the preparation (creation of presentations) and on location (labelling the seats and rows, back stage, etc.)! Thanks you very much for that!

In the run-up 32 colleagues from every division handled the preparation for the market stands, created presentations for them and then as “market stand leaders” presented them on location in order to provide other employees a glimpse of other projects and areas of work – an item on the agenda that was quite popular with the BUWOG employees. 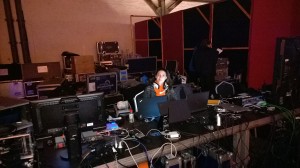 Plenty of technology behind the stage

For the event in Hamburg several employee videos were produced, the conception, planning and implementation of which also had to take place many months prior to Hamburg. Thus the BUWOG marketing team visited the biggest BUWOG locations together with the Vienna film team ZONE to film motivated employees for our video clip.

On the first night in Hamburg fantastic singer Sandy Edwards and the night club band “Le Clüb” fired things up at the restaurant Au Quai after everyone found a “Stühl” (chair) for themselves and tried the fantastic “Süshi” (sushi). Our host Enzo is, namely, a Frenchman with Italian roots, voilá – and it didn’t take long for the BUWOG spirit to be felt on the dance floor on the first day of the event. After all, the BUWOG Group employees had every reason to celebrate the successes of the past year together. 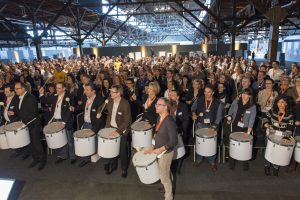 Playing music together – the BUWOG Allstar Orchestra in action

Approx. two months prior to the event the “critical phase” began in which one really was involved primarily in that one project. Everything is always in flux, and throughout the entire organisational process there are frequent changes, things are discarded, new ideas introduced and brought to fruition until, finally, one week beforehand when the local preparations begin the entire organisation is in place. There are still the last discussions on direction 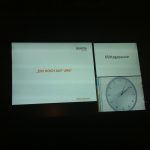 with the technology crew, where what happens when, who speaks, what’s played on the screen, what sound technology is used (jingle, micros, headsets, etc.) and how the lighting is to be set up for which situation is determined down to the last minute. There is the final dress rehearsal the night before. And then the booming ship’s horn sounds at the beginning of the event!

Looking back, we can say that the BUWOG employee event was a major success and we as an organisational team are still regularly getting positive feedback from our colleagues from every location, which makes us particularly happy. To conclude, I would like to take advantage of this blog entry to extend a VERY BIG THANK YOU to everyone who helped make BUWOG “Navigating the Future” into an extraordinary event.

Hello, my name is Bettina Schroft and, together with Ingrid Fitzek, I'm the "youngest" member of our MA+COM team. Not in age, but in terms of service. I've been at the company since April 2014 and, together with Ingrid, come from Tech Gate Vienna, where I was employed as an event manager.
The responsibilities in the marketing division are not unfamiliar to me; I performed them for nine years at BIG (Bundesimmobiliengeschäft), an Austrian firm for semipublicly-owned real estate. Here at BUWOG I'm delighted about the joint development of new structures – particularly with our colleagues in Germany. The creation of a new company CI and CD is always especially exciting and requires creativity as well as organisational skill. In March 2015 the second major employee event with all of the BUWOG people will take place – this time in Hamburg – looking forward to that!
To the profile ofBettina Schroft Show all posts byBettina Schroft