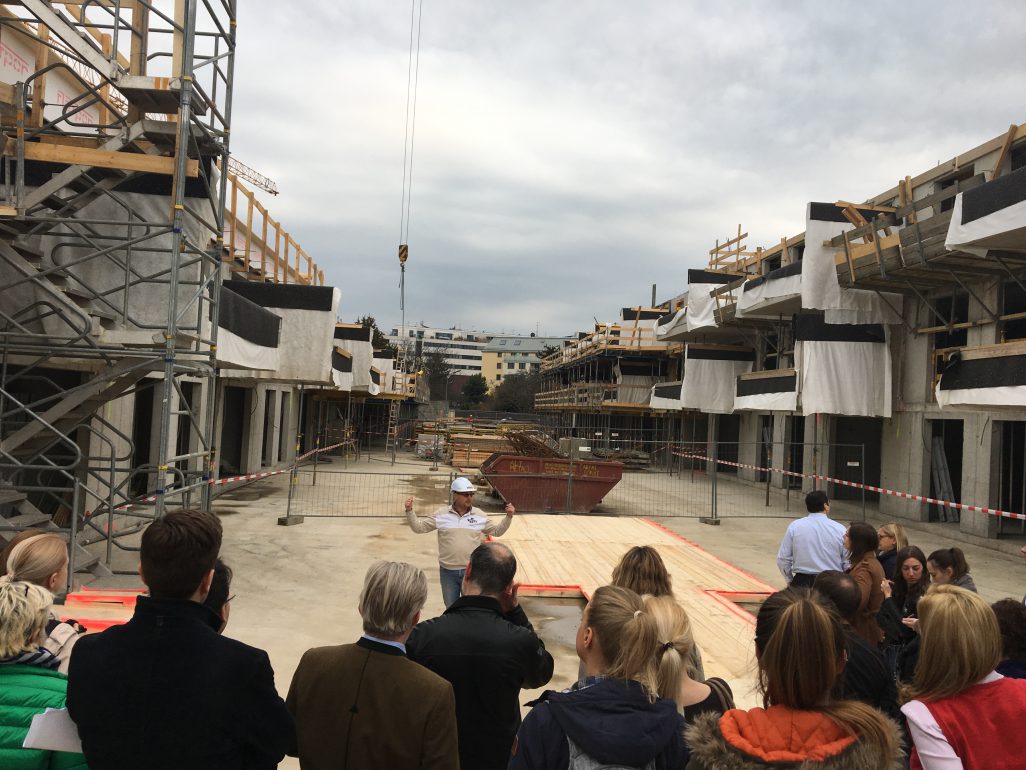 Twice per year we invite our employees to take part in a property tour through Vienna and, as part of it, to visit our latest projects and gain insight into our development activities.

On 21 March the time had come again, and my sales team and I extended an invitation to the employee property tour through Vienna. BUWOG CEO Daniel Riedl was also there this time and gained an impression of the latest developments at our construction sites for himself. With a touring coach and about 60 employees on board, the tour kicked off at our corporate headquarters on Hietzinger Kai in the 13th district. First it was off to Meidling, where we viewed our first project on the Rechte Wienzeile. The construction of the 144 privately financed city apartments began in October 2016; completion is planned for summer 2018.

The SOUTHGATE project on Sagedergasse is also located in the 12th district. It consists of six structural units in total and was built as a mixed-use property. The first unit of 78 rental apartments has already been completed. The other structural units of 164 privately financed condominiums will be completed in 2017. Following a tour of the inner courtyard and precise explanations concerning building progress by the project manager, we were invited to a finished rooftop apartment for small snacks and beverages. The highlight on the visit to SOUTHGATE, however, was the marvellous view across the south of Vienna enjoyed from the terrace. 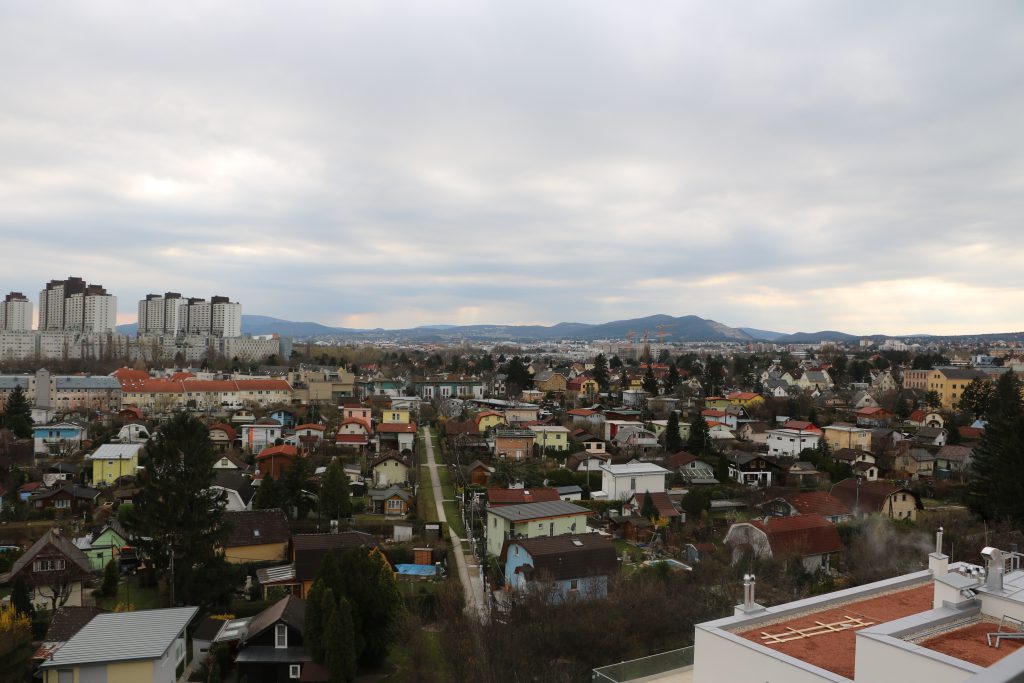 Refreshed, we continued to the 23rd district to what is currently our biggest construction project: RIVUS. A total of 500 apartments will be built here, including a kindergarten, elementary school and local stores. Here, as well, we had a chance to take a look behind the scenes and to climb the steps to the rooftop in the shell of RIVUS Quartus, the first structural unit. 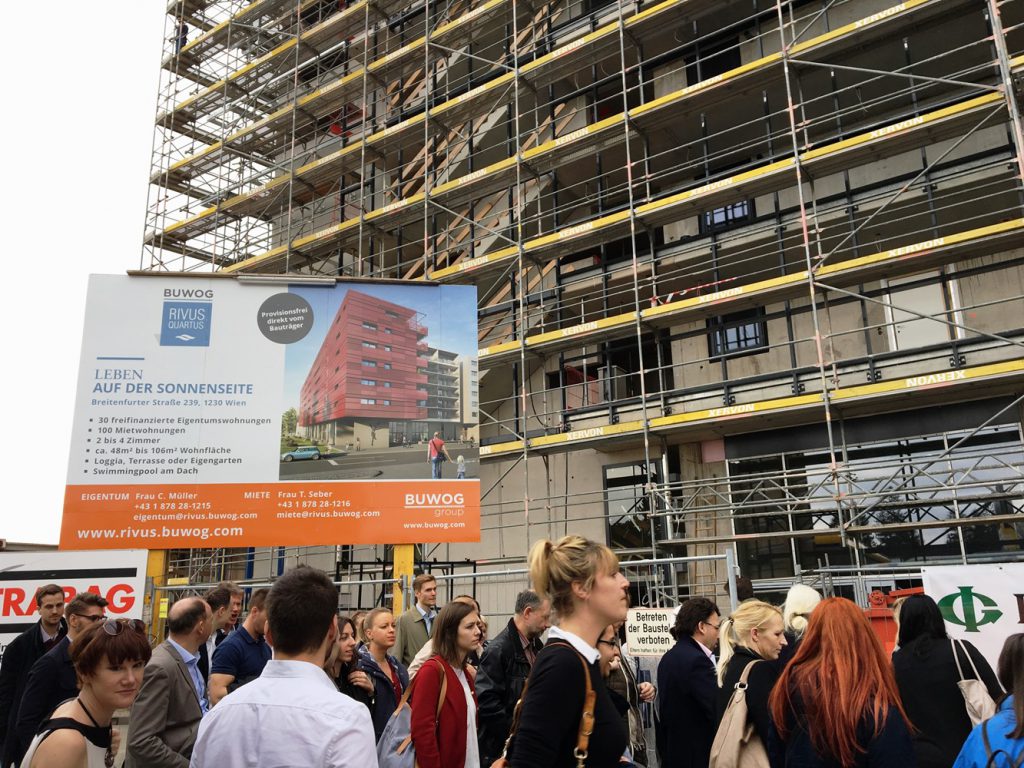 After RIVUS the property tour continued across the Danube, taking us into the 21st district. Arriving in Floridsdorf, two projects were visited: frei:raum21 on Karl-Nieschlag-Gasse and töllergasse t(h)ree. Both projects seem quite similar at first glance; after all, they are located in a green environment and have the intimate character of an estate due to their low-level construction. The differences, however, are revealed in their floor plans: while the apartments on Karl-Nieschlag-Gasse with their compact floor plans stand out due to their proximity to the upper end of the Alte Donau (Old Danube), the residential units on Töllergasse have spacious floor plans as well as a sustainable energy supply via green electricity and the use of a water/water heat pump. 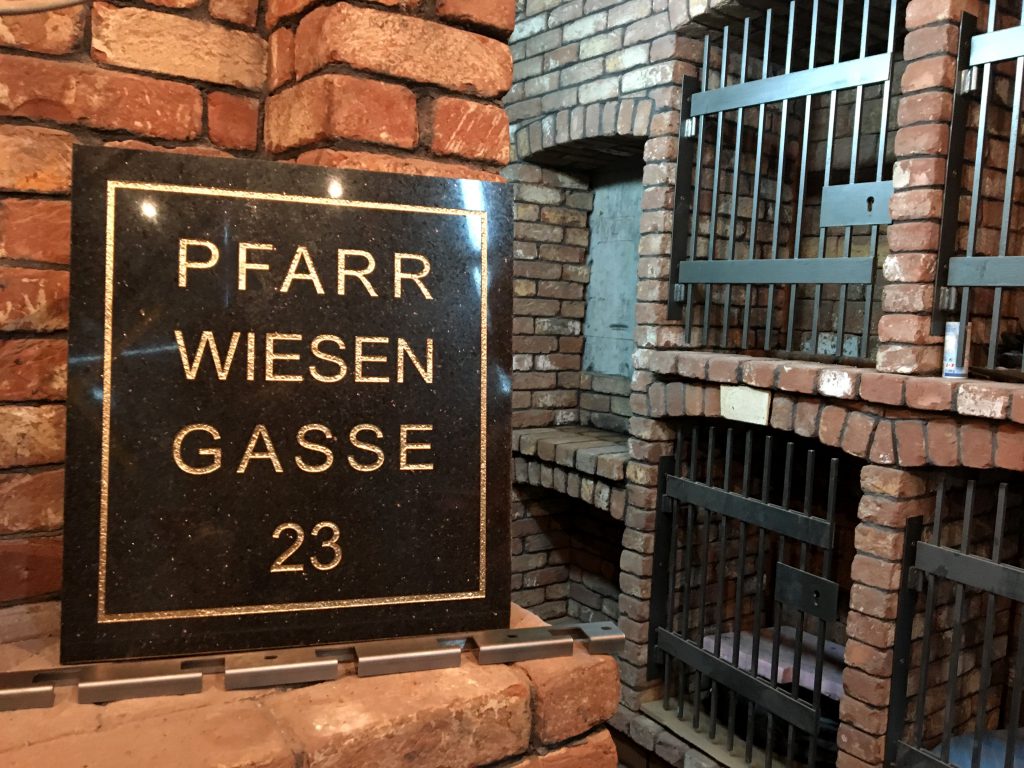 The conclusion of the property tour was the visit to BUWOG’s currently most exclusive project at Pfarrwiesengasse 23 in Döbling. The project is just about to be completed; the 78 privately financed condominiums and seven city villas will already be transferred to their future residents in April. First, we visited the penthouse apartments on the top floor and were amazed by the truly breathtaking view across Vienna in the direction of Kahlenberg. The project stands out with its numerous extras that will be offered to residents in the future. These include a fully-equipped wellness area as well as an elegantly designed wine cellar, during the visit to which we also got the chance to sample a couple of exquisite wines. Details on the construction of the wine cellar and on proper wine storage were provided directly by builder Reinhard Bayer, the developer of the wine cellar.

As a whole, the first BUWOG employee property tour 2017 was a complete success and we’re already looking forward to the tours of development projects to follow.